This morning, I woke up and checked Twitter as usual to see what news was happening around the world. I was overjoyed to read that the US Supreme Court have overturned the ban on gay marriage in California as unconstitutional. Numerous people on Twitter were discussing it using the #prop8 hashtag, but strangely the hashtag wasn’t trending on Twitter.

I’ve often wondered about the validity of Twitter’s trending topics (and don’t get me started about not being able to localize them for Australia yet), but it seems that while every other phrase related to the news about gay marriage being ruled unconstitutional was there, prop8 hashtag wasn’t.

Hopefully you can see in the photo what was trending to see what I am getting at.

Have you had any instances where you can remember weird things trending rather than the more obvious hashtag? 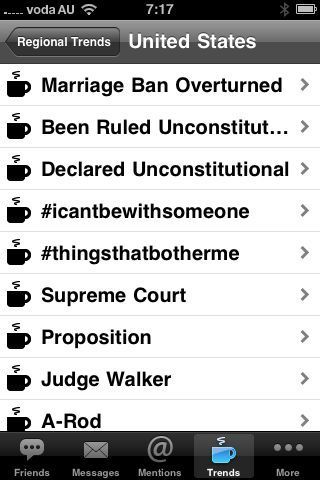