Oh yeah people… just last week I was discussing Jessica Biel and her relationship with Justin Timberlake. I believe I also mentioned ‘those’ lesbian rumors that just don’t seem to go away.

She was recently photographed unaware by someone at some random sports event with JT (in the green t-shirt in the photo). Now, they were also joined by some friends on their jaunt and Jessicas unnamed galpal had a good old feel of her ass when JT wasn’t looking.

Doesn’t she know that people are ALWAYS looking at celebrities? Some sneaky sod snapped a photo and oh yeah people.. that lady is getting a good old feel.

Now here’s what I’m thinkin….. firstly.. the chick with her looks like a big ole dyke. Look at the photo…. big shoulders, wifebeater top, lesbian pose, chunky ring on right hand finger, bands around her wrist… this one has got to be gay surely. And there she is… caught in the act of nonchalantly feeling up Jessica. Now, if you were a straight woman and your friend just randomly groped you, wouldn’t you at least flinch a little? Ya know, you’d at least be slightly uncomfy right? Not Jessica, apparently she didn’t even bat an eyelid. Infact, she seemed so comfy with it that you might be fooled into thinking this is something that happens often, that this person is already fairly intimate with you and simply forgot where she was for a second. Now far be it for me comment, I don’t know the girl, I don’t know what her relationship is about, but all I can do is try to read between the lines here like the rest of you. 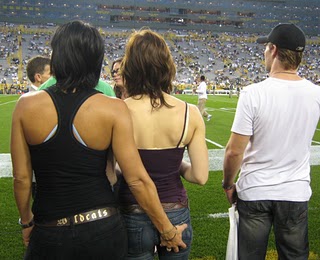 The ever reliable sources on the scene (ha!) stated that as soon as JT turned around, the hand was quickly removed from her ass. Now, is it a case of he just doesn’t know, maybe he does know and he’s a ‘beard’ for Jess. Who knows the true story, all I know is it’s making me smile and that’s a good thing. As always, opinions in this little blog of mine are just that.. opinions. There’s no fact in this, no truth that we know of.. but come on people… surely there’s just tooooooo many things going on here with this whole lesbo story.