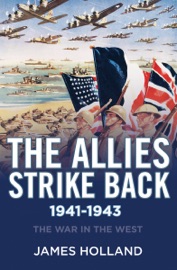 Volume two in this “expert, anecdote-filled, thoroughly entertaining” history of WWII follows The Rise of Germany as the Allied forces turn the tides (Kirkus).

James Holland’s The Rise of Germany, the first volume in his War in the West trilogy, was widely praised for his impeccable research and lively narrative. Covering the dawn of World War II, it ended at a point when the Nazi war machine appeared to be unstoppable. Germany had taken Poland and France with shocking speed. London was bombed, and U-boats harried shipping on the Atlantic. But Germany hadn’t actually won the Battle of Britain or the Battle of the Atlantic. It was not producing airplanes or submarines fast enough. And what looked like victory in Greece and Crete had expended crucial resources in short supply.

The Allies Strike Back continues the narrative as Germany’s invasion of Russia unfolds in the east, while in the west, the Americans formally enter the war. In North Africa, following major setbacks at the hands of Rommel, the Allies storm to victory. Meanwhile, the bombing of Germany escalates, aiming to not only destroy the its military, industrial, and economic system, but also relentlessly crush civilian morale. Comprehensive and impeccably researched, “Holland brings a fresh eye to the ebb and flow of the conflict” in this “majestic saga” of 20th century history (Literary Review, UK).